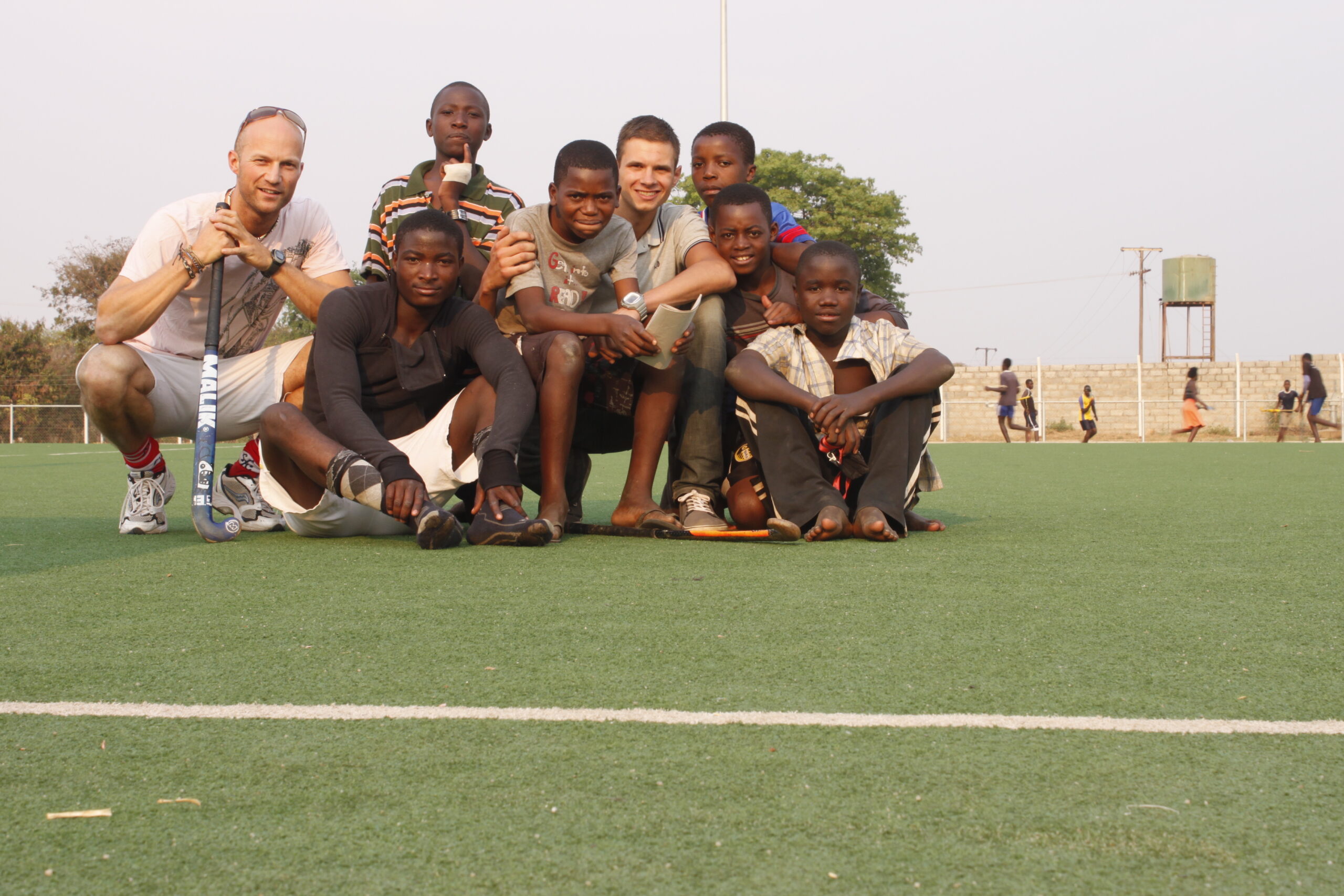 Gijs Hardeman started Hockey Dreams Foundation in 2012 after becoming addicted to Africa in the years previously. His mission? To offer young people in Africa a better future using sport as a vehicle. In part 2 of the trilogy ‘Ten years of Hockey Dreams’, Gijs Hardeman recounts the challenges and changes of the past ten years.

Hardeman: “Everyone who goes to Africa, starts out naive. I tried to prepare myself, but still I ran into a number of hard obstacles. The cultural differences are of course quite large. In the past ten years I’ve tried to learn ‘the” African culture, but also attempted to make it clear that I am from a different culture, and that we should learn from each other.

A good example of this is arriving on time. We Westerners often say that Africans never come on time. If it rains, they are usually late for hockey training, or don’t turn up at all. We think that’s ridiculous, when it rains in our part of the world, we still train. But there – certainly in the slum areas – rain is a very different kettle of fish than the Netherlands. They are afraid of getting ill, if it rains. Getting ill means not being able to work. Or needing a doctor, which costs money they don’t have. For us, If we get ill, staying home for a few days is no big deal; from their perspective there are entirely different considerations.

On the other hand, I’ve also explained to the coaches that every time they turn up an hour late for training, and we therefore have an hour shorter to train, they will be behind schedule. Other teams who do have a full training will gain an advantage. At a certain point, local teams were formed, one of which was able to play at international level. Then these things become an important issue. So they have to figure out how they can deal with the challenges of rainfall.

By looking at each others’ perspective, you can learn from each other. We learn from their resilience and inventiveness, and from their capacity to learn how  to run an organisation.

Another – and possibly the biggest – challenge for me was recruiting volunteers. It is a tricky process to continually attract people willing to contribute on a voluntary basis: people motivated by idealism. I am quite critical, and can be demanding. I have always found it difficult when I don’t always see my own commitment reflected in others. I’ve always tried not to make myself too important within the organisation. People sometimes said: you are Mr. Hockey Dreams, but it was always my aim to make lots of other people synonymous with Hockey Dreams.

I must have had conversations with twenty or thirty people who approached me about volunteer work at Hockey Dreams. We were one of the first organisations to do this sort of thing with hockey in Africa, very photogenic. Seeing nice photos of poor children motivates Dutch people to contribute. So people would call me, we’d talk for a couple of hours, and they were enthusiastic. However, three days later I’d get an email saying “I’ve looked at my diary and don’t actually have enough time…” Frustrating, since I’d expended a good portion of my available Hockey Dreams’ time in a conversation with someone who actually already knew that they weren’t available. This is the investment you have to make to find good people and grow your network, but it does slurp my own energy and motivation if people unnecessarily use up one’s time.

Volunteering requires a commitment. We need a good foundation on which to grow. Fortunately we do have a group of really committed and enthusiastic people we’ve found (or they us). If you look at our present team, they are all people who have been involved long-term and intensively with Hockey Dreams. That is something of which our organisation can be proud. After ten years, Hockey Dreams is a much bigger and committed team than I could ever have dared to hope.

Despite all the differences and challenges, we have created changes for many people to expand their horizons. For some Hockey Dreams’ coaches, we have literally opened up their world. Some coaches have for instance been able to visit the Netherlands for work-experience. I hope that they look at the world, and their lives, in another light now. Also that they have realised “Hey, there are people on the other side of the world working on our behalf“. Also, it strikes them that this is with no stake of self-interest or personal gain….I hope for the coaches that Hockey Dreams takes root in their hearts, so that they in turn see that what they do for the children, can change the lives of those children. In this way, we hand on the torch.

People here have a lot to gain. As I said: it is quite a challenge to find good volunteers, willing to invest time in coaches they’ve probably never seen or heard: people willing to sacrifice time to work for an idea or ideal. However, once we get to Africa – for instance when we made the trip with Amsterdam Ladies First Team for the African Hockey Experience (link to article) – we are instantly a bonded group. We don’t arrive with a pack of benefactors “popping over to check out the programmes”. We are immediately invested in each other’s lives. We’ve made it happen that there is an amazingly strong connection between the people there, and the people here. They share the same passion: hockey. We have totally different lives, but have fun together and learn from each other.

[1/3]: How mission and vision changed

Hardeman: “After working in Zambia it was my sport management background that set the tone: ‘And now? If I leave, what I’ve built up will disappear’. The girls and boys I trained in Zambia are kids from the slums. If they can get a paid job at a petrol-station or supermarket, they take it and leave the training-programme.

“We’ve always said to our coaches: you’re here because you want to be. You’re not here only so that you can study, or improve yourself. You have to have an intrinsic motivation to be a part of this group of hockey coaches and of this organisation.”