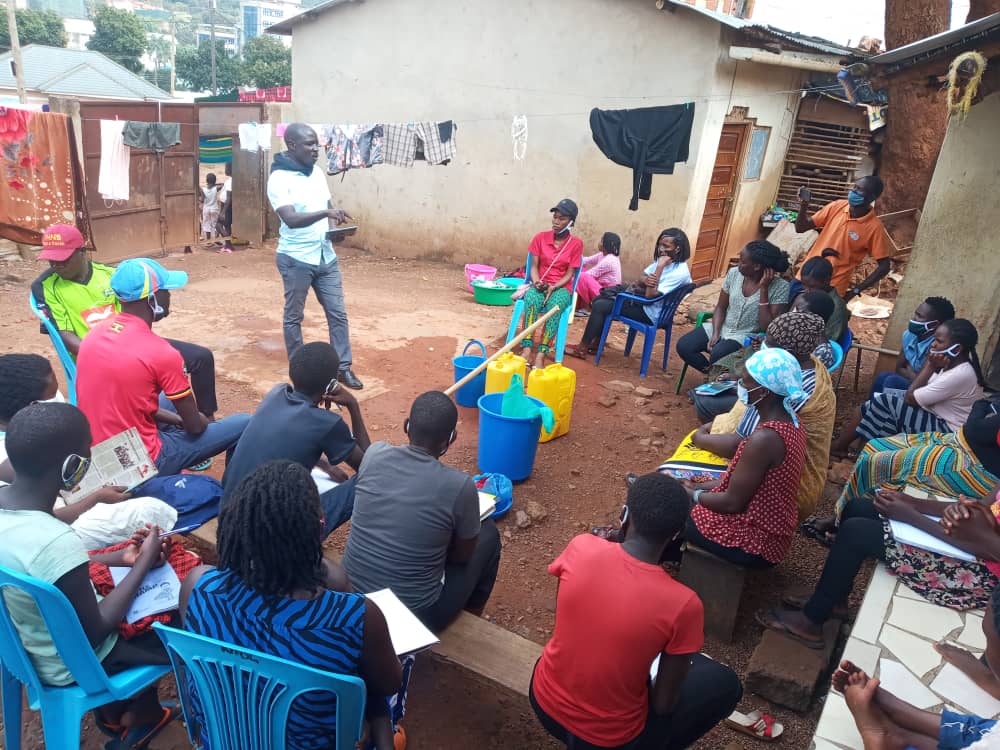 Coaches contributing to their community

COVID-19 measures have had a significant impact on our Coaches and the communities they live in. Most Coaches were not able to attend classes. All training sessions, camps and tournaments were cancelled. Because of these developments Community Projects launched: an alternative opportunity for Coaches both for learning and for contributing to their communities. A project devoted to giving back.

In this blog, Coach Teddy (meet Teddy) shares how the Hockey Dreams Coaches in Kampala, Uganda, organised workshops on soap making; how they took initiative and worked together with different community members.

Throughout this project, knowledge and resources were shared with our Coaches and passed on to over 40 community members. Together they managed to contribute to a hygienic living environment and Coaches experienced how a seemingly small act can ignite chance. Chance to continue progressing, even in times of COVID-19.

Project Proposal by the Coaches

The Coaches see that because of COVID-19 measures, community members face more difficulties to stabilise an income. Additional knowledge and skills could help them. Teddy and the other eight Ugandan’ Hockey Dreams Coaches wrote a project proposal in which they addressed how the problem could be tackled.

The idea was pitched by the Coaches: organising workshops on soap making. Michael Nash Monash is the Vice Chairperson of the Uganda Hockey Association and happens to be a soap maker. Nash was happy to teach the Coaches and the community the art of soap making.

Teddy: “I was scared and thinking of a way how I would open up to a cluster of people in my community about the project that I thought would be vital for this community. Luckily the enthusiasm was grand and many people were willing to participate. I told the people that learning to make soap is an investment; a business with an income could be created for the long run. This made people eager to learn.“

The Workshops – Soap making and selling

Mainly women of the community attended the workshops of the Coaches on soap making. Many women are on their own and are finding ways to take care of their families.

The soap was made in buckets and with use of blunt wooden sticks, and ingredients such as caustic soda, colourings and perfume. The product then is saved in 330ml bottles. The bottles are found within dumped packaging materials everywhere and are very useful for holding soap.

Teddy: “We kicked off with soap making and members were present in large numbers. This brought a beam on my face. All participants asked questions and joined in actively when the soap preparation started. Time passed and, not long after, the soap was ready. This brought excitement to both the Coaches and the community members. Samples of the soap were given for promoting sales and penetrating into the market.“

The community and Coaches had first-handedly experienced the making of the product and now wanted to bring the product on the market. Selling the soap was at first a challenge. There are many areas within Kampala where markets are set up but most spots are already claimed by other sellers on a contract basis. The Hockey Dreams Coaches though managed to find a spot and were ready to experience business hands-on.

Teddy: “We received customers who wanted soap in large volumes. Unfortunately not all buyers had sufficient cash and competition among other soap makers increased. However over time our earnings increased slowly by slowly and we got to invest into more soap making. We invested with our made cash reserve.“

Part of the income that is made with selling soap was divided for consumer spending; most income was invested into more soap making. This helpful push encouraged the women of the community to start preparing their own soap and subsequently start selling on the markets. An important side effect is that the women within the communities might become more economically independent.

Teddy, ‘’After careful listening and active participation of members during the workshop, some people started preparing their own soap for selling and this left Coaches and me in pure bliss.’’

The Hockey Dreams Coaches wanted to organise this Community Project because many activities were on hold due to COVID-19. This was an opportunity for Coaches to work on their own development and at the same time contribute to their communities. With a creative solution, and within COVID measures, the Coaches addressed local needs. A Community Project was launched and the acquired skills and knowledge last for many years to come. Throughout the project the Coaches learned on various levels.

Teddy: “I think that over the course of the project we (the Coaches) developed skills such as teamwork, problem solving, project planning and task management. A stronger relationship is built among the people we interacted with, mainly with the people of our communities.“

Also, and just as important, we strengthen the ability to grow as a person; we opened to learning and approaching people with an even greater sense of curiosity.’’

During the project, knowledge and resources were shared with our Coaches and passed on to over 40 community members. Together they managed to contribute to a hygienic living space. The Coaches showed that by addressing a community problem and thinking through its needs, a solid plan can be formed and its goals accomplished. It takes a whole lot of determination, but much can be done when the Hockey Dreams Coaches set their minds to something.

Teddy: “Words alone cannot describe the state I was in before the soap making. Was I scared or simply excited? When the Community Project came to an ending, still in a mixture of feelings, I then made the resolution to organise more projects because members raised many ideas like baking, craft making, and tailoring.“

Our coaches in Blantyre, Malawi, Uganda, helped their communities cultivation and harvest. They saw an opportunity, and came up with an idea to fight malnutrition and enable the community to have a new source of income. “One of the communities has land that can be used to farm – to work the land and to grow crops.”