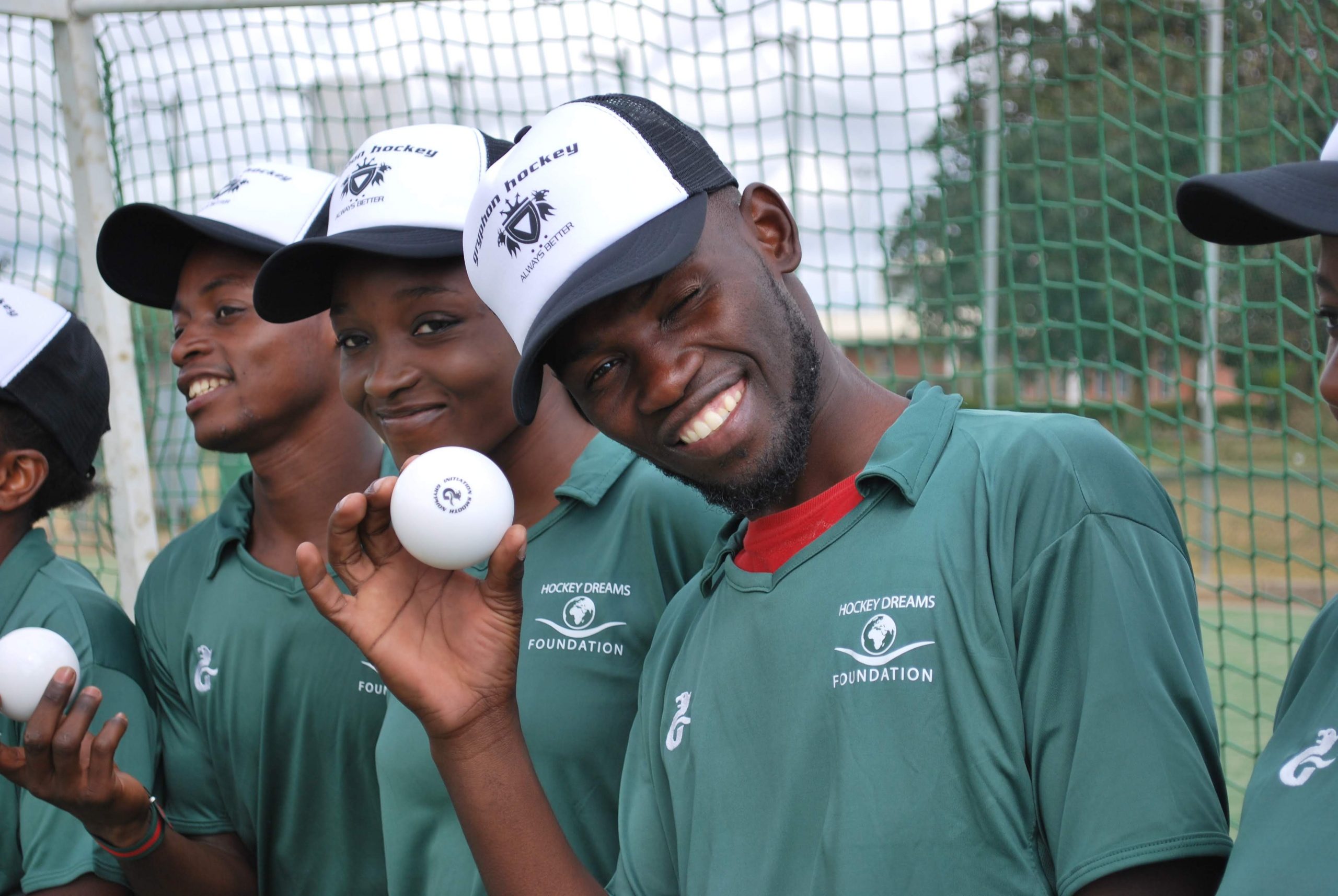 Shadrick is no newcomer. We present one of Hockey Dreams’ first graduates who is willing to share his vision on coaching, Hockey Dreams and on the sport hockey overall. A must-read for both coaches in the making and other hockey enthusiasts.

Hello, Shadrick. Thank you for meeting up. Could you describe your passion for coaching hockey and for the sport itself?

“From the year 2010 I have played hockey and my journey has been both wonderful and thrilling. I have learnt a lot whilst playing hockey and too from meeting different people from different walks of life. My passion for coaching is driven by motivation; I really love to motivate and encourage the players and the people around me.

In terms of the sport itself my passion is to see hockey grow from a junior group of kids all the way to the senior levels. Above all the sport should develop and grow in our country just like other sports have developed. Personally, hockey and its community help me to learn from different sorts of people: my fellow players and both local and international coaches. What is most important too to me as a person is to put a smile on the people’s faces around me.“

You are one of the first who joined our trainee programme. What was your introduction to Hockey Dreams Foundation like and how was the programme?

The following year, that was 2013, another opportunity came along for the coaches to apply. I applied and luckily I was selected to be part of Hockey Dreams Foundation. During that year I had different projects at Oydc (Zambia Sports Development Centre) and the community at large. Along the way I was appointed a store manager to look after the equipment. I was very pleased with the job as I was given responsibility. During the Hockey Dreams-camps we were given different tasks to do and those activities really helped and shaped me to become a responsible person.“

You attended our trainee programme and helped and supported many kids throughout hockey. Nowadays you are a professional hockey player and practice sport coaching at a private school. Despite all ongoings you are still associated with Hockey Dreams Foundation. In what way?

“Yes, I am! I help out during Hockey Dreams Hockey Camps and I help in assisting coaches with their ongoing projects. I am providing my help during my holidays. I am mostly busy with my job to have my own personal projects to work on so I am glad to help others whenever I can.“

You are a practising coach at private school Musikili in Mazabuka. What does an average day of work at the school for you look like?

“An average day for me starts with writing down my plans for the day which are in line with the activities for that particular day. At times I have duties to do in the morning for the school; since it is both a day- and boarding school we usually have quite a few tasks to complete. Depending on the day’s timetable I usually start my practice at 8 a.m. and after I have a three hours break.

During that break I study my personal studies then later in the late afternoon I resume my coaching practice with the different age groups. After the long days of practice I usually do my personal exercise at home. Later on I hang out with my workmates and in the evening we have dinner and I can finally rest up for the next day’s activities.“

In our previous story you were close to writing your final exams. What are you currently doing education-wise?

You successfully opened your barbershop with a small investment by Hockey – as seen in your video. Can you manage to combine this work with your job as sports coach?

“It is hard to focus on both properly. Therefore the barbershop is currently being runned by someone else because I cannot manage to be present at all the time to look after it effectively.“

Tell us about your hockey career and its origins. How are things with the national team?

“I began my playing career at school in 2009 and my first competitive tournament was in 2011 – the ACCC tournament. During that time I had the privilege to be trained by the coaches from the Netherlands who had come to visit our country. In 2014 we entered the qualifiers for the Youth Olympic Games in China and we managed to qualify our team. Therefore we participated in the Games for the first time in our country’s sports history.

I had my first coaching experience with the Lusaka Tigers Hockey Club. Here I coached the junior teams. Later I moved to Lusaka Sharks Hockey Club where I helped and assisted and in 2015 Samuel and I formed our own club known as Hotspurs Hockey Club. In 2018 I had the opportunity to be the assistant coach for the national team that took part in the Youth Games that were held in Argentina that year. All in all I have taken part in many hockey clinics and camps which are both locally and outside the country.

In terms of my hockey career I am still actively playing hockey and I am coaching as well. As for the national team I am still part of the team and I am currently the team captain.“

In your opinion, what would you say is making you a good coach?

“In my own opinion, what makes me a good coach is the ability to be open to different views and to never stop learning from different people and different sports – not just hockey. I learn from different coaches and individuals on how they manage their teams and manage life in general. I keep innovating myself from time to time moving together with the technology and dynamic changes of the sports world; combining both the new and old style.“

Your hockey and coaching techniques are exceptional and many have benefited from them. Do you have any hints and tips for your fellow hockey enthusiasts who are reading your story?

“Every person needs to allow their self-learning by making room for making errors and mistakes. Without mistakes learning is limited. Be a role model on and off the field to both young and old in the community. Learning should never stop in one’s life and above all it is important for one to ask from those that have the knowledge. Just like the saying goes: ‘You have not because you ask not.‘”

What was your best experience within your Hockey Dreams adventure? For example, do you have a memory of a unique day that will stay with you?

“My best experience was the time we were visited by the ladies first team from the Amsterdam Hockey club.“

What, in your opinion, is the strength of the Hockey Dreams programme?

Is there anything you would like to share with Hockey Dreams Foundation, the kids, the coaches and others to conclude our interview?

“Hockey Dreams Foundation should continue supporting and helping the development of the game of hockey. For the coaches and kids they should not stop learning and motivating the people and communities around them.“