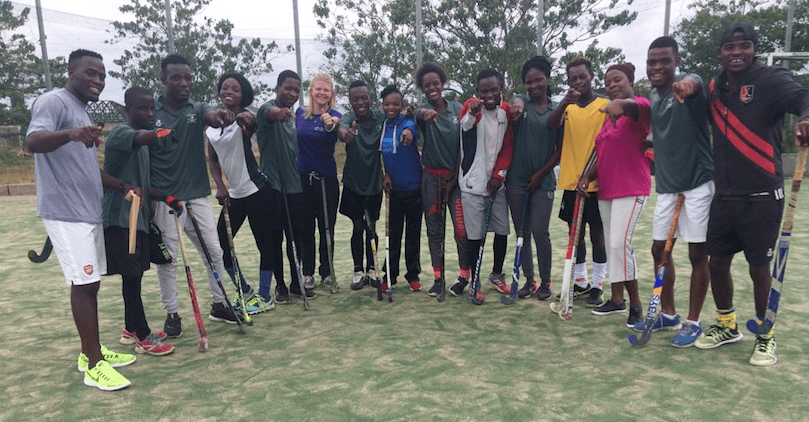 Hockey is a tool which should help the coaches to learn the kids more than playing hockey. Last Friday and Saturday day, the Lusaka coaches got a workshop from Sport in Action in cooperation with Join for Joy. The workshop was about sport for development. Coaches should not only work on sport development but also use the power of sports as a tool to develop people personally: Sport for Development. The kids in the programs of the Hockey Dreams Foundation come mostly from the compounds around the OYDC. Every day these kids are confronted with issues like health problems, HIV/aids, sexual harassment and drugs. The coaches of the Foundation can have a very big role in the future of these children. Therefor  it’s needed the coaches know how to create a safe environment for the children to play hockey, and have the right knowledge to advise the kids about all the dangers out there.

During the workshop the different problems in the community where discussed and what the children need to know about it. In families around a lot of problems there is a big taboo, so the kids will hardly be informed on these topics. For a coach there is a great opportunity the teach these children about the topics they will not at home, for example sexuality. The coach is for a lot of kids someone with authority, who knows everything bests, so also stuff like this will be listened to. During the workshop the Hockey Dreams Foundation coaches were taught and learned that the influence of them as a role model is a big part of being a coach. When they are out on the field with the kids they have to be aware of this and behave like a good role model.

During the practical part of the workshop we played a game to see how to implement the knowledge in a training. The game had people who represented mosquitoes, doctors and people of the communities. The mosquitoes were running around and tapping the people. Once you were tapped you had malaria. You had to stay still on the place and wait for a doctor to come to help you. Two places were a safe zone, were the mosquitoes could not come, like a mosquito net. While playing the people from the communities noticed that they had to ask for help when they were sick, otherwise the doctors would not immediately identify them as sick. This example of a game is a fun and easy way to learn kids there are ways to protect yourself and that you should always go to the doctor if you are sick. The coaches came up with some hockey related examples as well. For example, when someone is using the back stick and you want to make sure he or she stops using it, you have to play that the back stick is in illness (cholera) and you should avoid it. An other example I really liked was that the ball represents water. Water is needed to stay alive. If you are playing with your friends you have to share it. Once you lose the ball you have to make sure, together with your teammates, to get it back and be able to share it with all your friends again. Kids will learn about teamwork and probably do not even notice it.

The coaches learned a lot of useful lessons during the workshop and so did I. Where in the Netherlands we are so focused on sport development, we sometimes forget about the sport for development aspects. Maybe because we are used to a safe environment to play in. But also as a coach in the Netherlands you still have a big influence on your athletes. The relationship you create with them needs to contribute to this safe environment.